Lloyd William Hillman (1955-2005) received his Ph.D. in physics from the University of Rochester, under the supervision of Carlos R. Stroud. He began his professional career at the former Research Laboratories of the Eastman Kodak Company, Rochester, New York, as a research physicist, where he conducted R&D work on optics, lasers, and imaging. From Eastman Kodak, around 1990, he went on to a brief academic appointment at Cornell University before assuming a professorship in physics at the University of Alabama, in Huntsville, where he eventually became Department Chair and remained for the rest of his career.

At the University of Rochester, Hillman did pioneering research with both Carlos R. Stroud and Robert W. Boyd in the area of laser dynamics. At Eastman Kodak, he co-edited with F. J. Duarte the book Dye Laser Principles, that became a classic in the field of tunable lasers.

Hillman was quick to recognize good physics when he saw it. He also had a pleasant personality and a sharp sense of humor. One of his antics at the international laser conference Lasers '87 is described in Duarte's Laser Physicist. In his spare time, he was an enthusiastic wine maker. He was survived by his wife and young family. 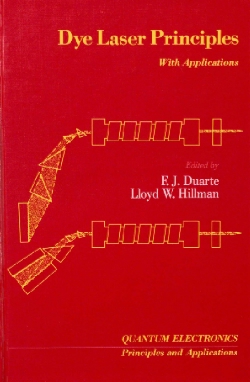 Page published on the 4th of September, 2017